Amelia Earhart = perhaps the most badass person who ever lived on this planet.

There is so much we can learn from her on International Women’s Day.

Everything that “can’t be done” actually can be done. It just hasn’t been done yet.  So don’t strive to “be cool” ; strive to “create cool”

Creating cool makes you a pioneer. It might mean doing things that your friends and family deem reckless. That’s because most people can’t FATHOM living without the fear of other people’s opinions. 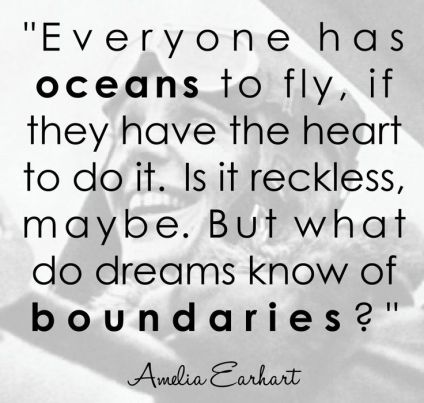 2.  Don’t complain about getting no respect. Demand it.

In Earhart’s day, getting married often meant the end of your identity as an individual human being.  Earhart didn’t bitch and moan about this. She simply refused to let it happen to her.

When a George Putnam wanted to put a ring on it, Amelia was down.

But Amelia was no “ride or die” chick. Because even though she truly wanted to hit it, Amelia agreed only to a trial period at first.

“Women, like men, should try to do the impossible. And when they fail, their failure should be a challenge to others.” – Amelia Earhart

According to this Mental Floss article, Earhart wrote for Cosmopolitan. But not about topics that most would have found acceptable back in the 1920’s.

In total, she publish 16 published articles. The titles of which include:

4. Never Box Yourself In.

Did you know Amelia Earhart had a fashion line?

..Just because you are a badass pilot, doesn’t mean you can’t look great.

People fear the unpredictable. If they can’t box you in, they’ll keep trying. But don’t let them box you in. And don’t box yourself in. Opportunities are everywhere.

Amelia Earhart was a completely unique human being. A pilot, a pioneer, a writer, a fashion designer, a wife – she was so multi-faceted.

Amelia had a decidedly androgynous flair for the time, and yet was entirely comfortable with her womanhood and femininity.

Wishing you a happy (and empowered) International Women’s Day!

If you love Fat Girls Fitness, subscribe to our bi-weekly newsletter.